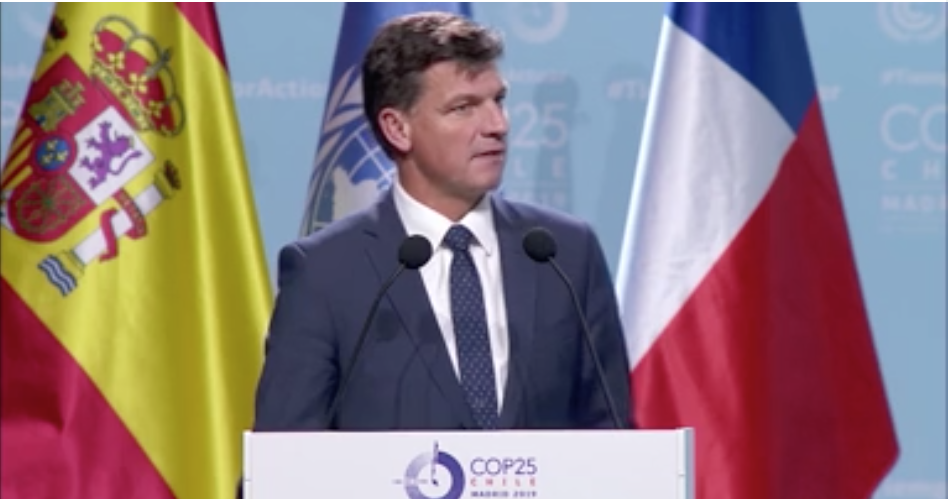 On Tuesday 10 December Australian Energy Minister delivered Australia’s national statement to the United Nations climate conference COP25 in Madrid. While bushfires raged in the state of New Soutrh Wales and across Australia, and even in Angus’s own southern Tablands electorate of Hume, there was not a mention of the bushfirers in his address to the international community.

The advicacy for this met pushback. But it was one of the destabilising factors in the conference that provided distraction and prevented the conference reaching more ambiituos outcomes.

It is ironical that most of the energy transition driven by uptake of renewables in Australia since 2013 has come about despite the actions of the Liberal National Party government that Angus Taylor outlined so boldly in his speech.

Richie Merzian, Climate and Energy Director at The Australia Insitute, and a former climate negotiator for Australia, did a commentary on the Ministerial speech:

Representing a country on fire and didn’t mention it. Once.

Then appeared to question the value of ambitious targets.
https://t.co/qLM7snAx7n#auspol

“Australia is committed to the Paris Agreement. We are already on track to meet and beat the target we have set for 2030…

Actually emissions continue to trend upwards, noting a sight dip due to loss of agriculture from climate impacts…https://t.co/B4p6bCO5KY

“On recently released forecasts we expect to beat our 2020 targets by 411 million tonnes, which is around 80% of a full year of emissions….

This new 411 Mt is dodgy. Keep eye out for new report in next day from @TheAusInstitute and @BillHareClimate on the KP carryover….

Yes – its not strong targets but technology that will save us.

“In Australia, we are developing a Technology Investment Roadmap….

…“a hydrogen industry that offers enormous benefits for our economy and could, through our exports, assist other countries to reduce their emissions….

Secondly, there is no requirement for clean hydrogen so the hype is used to lock in cheap fossil fuel hydrogen processes which are highly emissions intensive BUT burn clean and therefore reduce emissions for importing countries

”Australia provides an important perspective as one of the world’s biggest, and most trusted energy suppliers…

Australia sure does as the worlds third largest supplier of fossil fuels (in terms of emissions) with plans to keep growing! https://t.co/a1uazwiqsW

”Renewables are now more than 25% of our electricity supply in our National Electricity Market….

Thanks to the national renewable energy target that is finished.

”The Australian Renewable Energy Agency has provided $1.4 billion to improve the affordability and increase the supply of renewable energy in Australia….

And now ARENA will run out of funding (no more $ for projects this financial year and no funding at all in 2022)!

Minister Taylor promises a technology strategy next year and talks to the $3.5 Climate Solutions Package (less money over a longer period for ERF) and turns to the Pacific

It doesn’t make up for pulling out of the Green Climate Fund which got Aus a fossil of the day yesterday…https://t.co/e8GAD4z6qu

No mention at all of bushfires! NONE

Fires supercharged by climate change and NOT A SINGLE MENTION

Here is Sydney before and now #COP25 #ClimateCrisis pic.twitter.com/yKFb0zen8c

For context, I was negotiating for the Australia Government when a Super Typhoon hit the Philippines , and the Philippine negotiator across from me went on a hunger strike to demand more climate action.

And look at what Minister Taylor mentioned…https://t.co/y5ERVohzWu

Just remember that Australian Energy Minister Angus Taylor didn’t once cite the terrible #nswbushfires or that #SydneyIsChoking on bushfire smoke in his ministerial address to the High Level #UNFCCC Plenary at #COP25. Absence of action, absence of empathy in #auspol

Worth noting that Angus Taylor has now left Madrid and the COP25 climate talks.

Amber has tracked down Angus Taylor in Goulburn. She asked him multiple times about the forged document but he refused to comment while the police investigation was ongoing. Then he blamed Labor. He also claims not to have seen any criticism of Australia at #cop25. #auspol https://t.co/DejcrPJiCh

Energy Minister Angus Taylor represented Australia at #COP25. Not one word in his high level speech on #NSWbushfires that were occurring.https://t.co/tuLmEYBMD9
Village of Balmoral in his NSW electorate has now been wiped out, but still silence.https://t.co/eBP47sPEOI

I thank Chile for presiding over this important session of the Conference of the Parties.

I also recognise the contribution made by Spain for agreeing to host this meeting at very short notice. You have our thanks.

The Paris Agreement sent a powerful signal to the world that countries are serious about climate change.

Australia is committed to the Paris Agreement. We are already on track to meet and beat the target we have set for 2030, just as we are meeting and beating our Kyoto targets.

Our recently released forecasts say that we expect to beat our 2020 targets by 411 million tonnes, which is around 80% of a full year of emissions.

The world needs action to reduce emissions and Australia believes technology is central to achieving this.

We can only reduce emissions as fast as the deployment of commercially viable technologies allow.

This means we need to get the right technology to the marketplace when and where it is needed.

In Australia, we are developing a Technology Investment Roadmap.

We will continue to work closely with our industry, researchers, and our international partners to find commercially viable deployment pathways for these priority technologies.

An example of a priority technology is hydrogen. Last month we released our National Hydrogen Strategy. The strategy outlines actions for the development of a hydrogen industry that offers enormous benefits for our economy and could, through our exports, assist other countries to reduce their emissions.

We recognise that international collaboration will be crucial to achieving our technology vision. We are an active participant in Mission Innovation, particularly in the hydrogen, heating and cooling, and smart grids challenges. I welcome the recently formed Leadership Group for Industry Transition and am pleased to announce the Australia will join that initiative.

Australia provides an important perspective as one of the world’s biggest, and most trusted energy suppliers.

In Australia, an unprecedented wave of low emissions energy investment is already underway.

Last year, renewable investment was Australia’s highest on record at AU$14.1 billion, which is world leading investment given our population.

Renewables are now more than 25% of our electricity supply in our National Electricity Market.

The Australian Renewable Energy Agency has provided $1.4 billion to improve the affordability and increase the supply of renewable energy in Australia.

Australia has the world’s highest uptake of household solar panels, with around two million, or one in five, Australian households now having solar panels.

This increase has not been without issues and one of our challenges is to ensure energy remains affordable and reliable as these changes occur. We cannot move faster than the technology allows.

Our long term strategy to reduce emissions is focused on deploying cost effective technologies and we will be releasing a more detailed technology strategy next year.

The strategy will build on the $3.5 billion Climate Solutions Package announced earlier this year, which has provided the pathway to meet or exceed our 2030 target, as we have done for our previous targets.

As well as reducing emissions at home, Australia is focused on working with our developing country partners to address climate challenges, particularly our Pacific neighbours.

We are delivering on our $1 billion climate finance commitment from 2015 to 2020.

We have announced an additional $500 million over five years from 2020 to help Pacific nations invest in clean energy and climate and disaster resilience.

Acknowledging the importance of continuing to build resilience, Australia is pleased to be hosting the Asia Pacific Ministerial on Disaster Risk Reduction in Brisbane in June 2020.

We will also invest $140 million to mobilise private sector investments in low emissions, climate-resilient solutions for the Pacific and Southeast Asia.

Like our Pacific neighbours, we recognise oceans are critical to health, wealth and survival. We are a world leader in ocean protection and sustainable use. We play a leading role in the International Partnership for Blue Carbon to improve understanding and management of coastal blue carbon.

Here in Madrid, we need to finalise arrangements for Paris Agreement carbon markets that give us confidence that traded carbon units represent genuine emissions reductions.