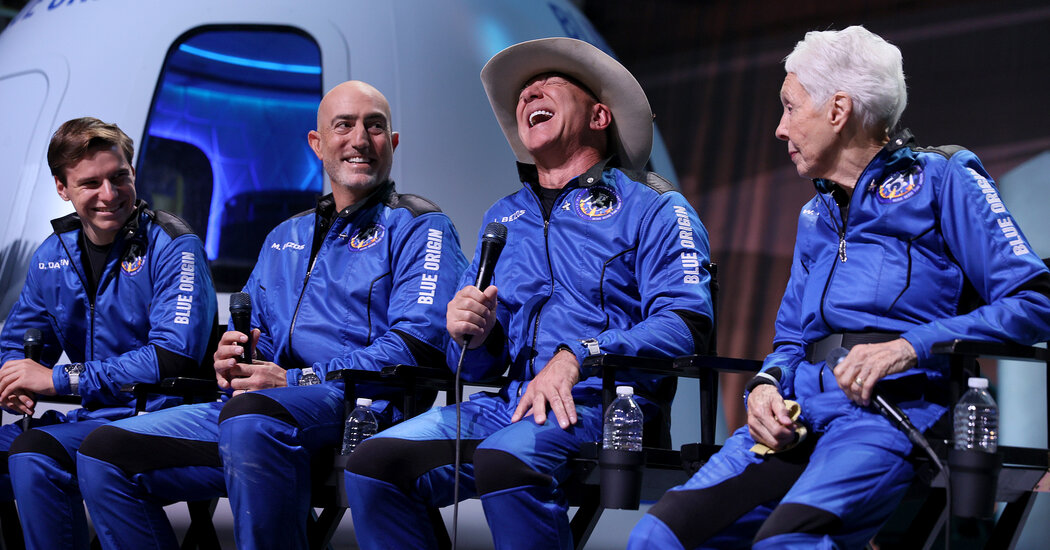 Coming down on Tuesday from his space trip, Jeff Bezos, the richest person on the planet, reaffirmed his commitment to fighting climate change. “We need to build a path to space so that our children and their children can build a future,” he said he told MSNBC.

Bezos says space tourism is a first step in moving people (and heavy industry) into space to prevent an energy crisis on Earth. His fellow billionaire space entrepreneurs, such as Richard Branson and Elon Musk, have also said that their companies are a response to climate change: Mr. Musk wants to colonize Mars in case we ruin the Earth.

Critics argue that space tourism will increase emissions instead of saving the planet. But the industry remains low on the pollutant list.

The global space industry uses less than a tenth of the propellant than the aerospace industry. Also, the amount used for rockets like the ones that brought Branson and Bezos into space is a small part, said Martin Ross, a scientist at the Aerospace Corporation, a federally funded research and development center. In a recent study, Mr. Ross found that space tourism companies could launch up to 10,000 suborbital flights a year before the effect of their emissions into the atmosphere began to approach that of orbital rockets.

It is not yet understood exactly how a growing number of rocket launches would affect the planet. The space industry is the only direct source of emissions into the stratosphere of more than 20 kilometers. The particles that rockets leave behind can absorb sunlight or reflect sunlight, and can change the climate of the stratosphere or affect the ozone layer.

“We know it’s not a problem now,” Mr. Ross said, “but we can’t predict how much of this up and down you can do before it becomes a problem.”

Aside from whether space tourism will contribute to climate change, there is skepticism about the claims of space companies that can help address it. Some say Mr. Bezos’ view of space colonization is not feasible, and Bezos himself calls it a “long-range problem.” Billionaires going into space should first consider climate disasters on Earth, critics argue.

It is not entirely fair to say that Bezos has ignored these problems. While Amazon is a major polluter, it says it aims to neutralize carbon by 2040 and Bezos has pledged $ 10 billion of his personal wealth to tackle climate change. But there are those who say that there is a great gap in their approaches: are the moons only for space?

What do you think? What role can space tourism play in climate change? Let us know: [email protected]. Include your name and location, and we may include your answer in a future newsletter.